Carroll Creek Park is a 3/4 mile park along Carroll Creek in the center of Frederick.  The park had its grand opening in the summer of 2006, after a 28 year time span from conception to building. The linear park is part of a shared-use trail system, including Rock Creek and Baker parks, connecting to the Monocacy River near the Frederick Municipal Airport.

Hurricane Agnes Is the Catalyst

After the downtown area of Frederick flooded from the aftermath of Tropical Storm Agnes in 1972, plans began for a flood-control project that eventually put the creek underground in 1993, with a waist-deep 1.3 mile channel waterway with concrete banks 40 feet wide. The flood-control project starts in Baker Park.

The $60 million flood control project made Carroll Creek Linear Park possible with its brick walkways, many bridges, fountains and sculptures. Estimates for Carroll Creek Park range between $10.2 million and $20 million in total cost.

Carroll Creek Linear Park has an amphitheater that seats about 400 people.  The amphitheater is the site of many concerts and events throughout the year.

The bricked walkways interspersed with mosaic tiles, the raised planters with seasonal flowers and the many fountains and waterspouts have created a lovely scenic backdrop for shopping, dining and the many cultural and civic events that occur on the creek. 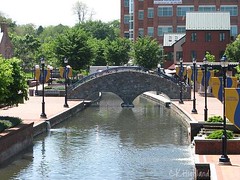 Several ornate bridges cross the creek at intervals, a suspension bridge joins the C. Burr Artz Library with the Maxwell Place Condominiums, a stone bridge joins Carroll Creek Promenade with the south side of the creek, and a lovely ivy-covered bridge is on the west side of Market Street, reminiscent of a “secret garden”. 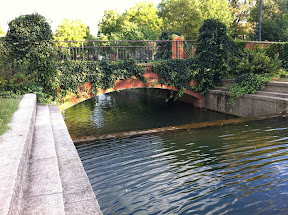 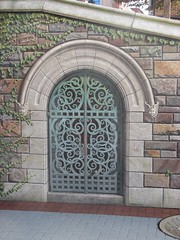 The main attraction, since its completion in 1998, has been the Community Bridge, painted by muralist William Cochran and assistants. The bridge mural project transformed a plain concrete bridge into the stunning illusion of an old stone bridge through trompe l’oeil (“deceive the eye”) techniques.

There are hundreds of symbols and carvings in the stones scattered throughout the work which represent stories contributed by thousands of people from the community, and from across the nation and world, making the Community Bridge an inspiring symbol of common ground. 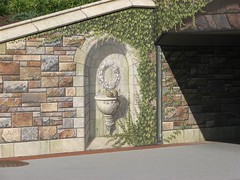 The remainder of the Linear Park was completed in 2016, from East Street to Patrick Street, with more fountains, beautiful hardscapes and the promise of development and renovations to the buildings in the area.

With all the rain we’ve had at times, it’s great to see that the project is really doing it’s job. During the floods in May 2018, the waters were directed right where they were designed to go.

Several developments are waiting for the completion of the park: The Downtown Hotel and Convention Center, Wormald plans The Galleria, a 30,000-sq-ft mixed retail and residential complex. Douglas Development has projects and McCutcheon’s Apple Products is planning an expansion.