You are here: Home / Frederick Living / The Frederick Historic District

The City of Frederick is the home of one of the largest and best-kept Historic Districts on the East Coast. The Frederick Historic District, with about 50 square blocks of rich architecture and history, has received many awards, including The Great American Main Street Award in 2005. It was named one of the “Distinct Destinations” in 2002 by the National Trust for Historic Preservation, and was named one of  “10 Great Neighborhoods” for 2010, by the American Planning Association (APA).

Enjoy our video: A Day in Downtown Frederick:

Frederick’s Historic District stretches from East Street to Bentz Street, and from 7th Street in the North to Maryland School for the Deaf.  In the Historic section, you’ll see Federal style houses dating from the 18th century, many restored to their former splendor.  (Map of Historic District)

The revitalization that has been going on in Frederick City for the last 2 decades has made the downtown area a very desirable location.  The Historical Society has done an excellent job of maintaining the integrity of our 18th and 19th century architectural heritage.

The Community Bridge: The Carroll Creek Linear Park was designed and built in response to the flood of 1972, inspired by Riverwalk of San Antonio. 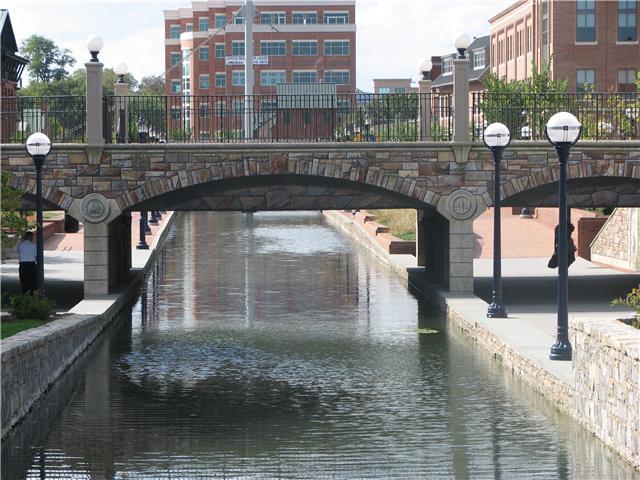 The Park which runs the length of Carroll Creek from the top of Baker park to the other side of East Street, was a 20+ year project, which officially opened June 21, 2004.  The final phase of the park was completed in 2017. The park includes brick pedestrian paths, fountains, additional water features, landscaping, benches and several walking bridges over the creek. Each summer the creek is filled with plant life. Each winter the Creek lights up with boats that the residents vote on to raise money for charity. The Carroll Creek Linear Park is a gem for the downtown Frederick area.

The shopping in the Historic District is diverse and rich.  On East Street, you  can shop at Everedy Square and Shab Row,  with anchor stores like Talbot’s.  There are hundreds unique gift shops, restaurants and cafe’s. The downtown area offers an abundance of non-chain restaurants, representing every food taste imaginable. Find out more at Frederick Downtown Partnership.

Frederick is Rich in History

Frederick has many opportunities for the History buff.  The Civil War  Medicine Museum is at 48 East Patrick Street.  Visiting Antietam National Battlefield is worth the drive if you are interested in Civil War Medicine.

At the western end of Baker Park you can visit the Schifferstadt Museum , a  17th century German colonial  home.

Child Guide Magazine is a great resource for historic tours in the area for children. The Rose Hill Manor Park and Children’s Museum, on Market Street is a nice children’s history museum, with lots of special activities throughout the year. Read more about Frederick History.

For more information on historical sites in Frederick:

Find Out What My Historic District Home May Be Worth

Homes For Sale in the Historic District

Homes for Sale in Whittier Pond
Next Post: Waging War on Stinkbugs in Montgomery and Frederick County Md