You are here: Home / Frederick Living / Historic Frederick in Pictures 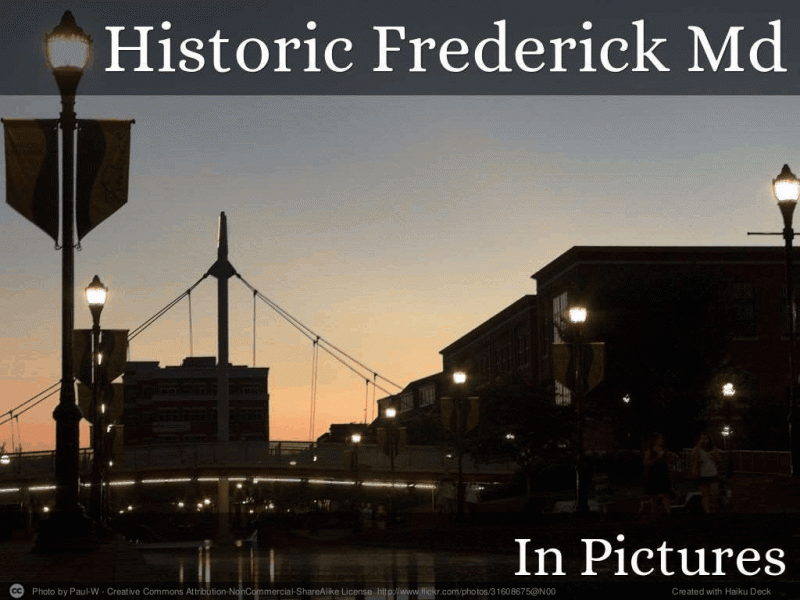 Frederick Maryland is a beautiful historic city in central Maryland. The name of the city either came from Frederick Calvert, 6th Lord Baltimore, who offered free land to those who would settle the Monocacy River Valley, or possibly it was named after Frederick the Great, of Prussia. The earliest settlers of the area in the 1600’s were German, and the city was founded in 1745 by German settlers.

Daniel Dulany, land speculator, laid out “Fredericktowne” in 1745. To control the crossroads that was Fredericktowne during the American Revolution, the British garrisoned troops at the Hession Barracks, which still stand and have been used several times since.

Fredericktowne was the “jumping off” point for Lewis and Clark, who used the Hession Barracks to accumulate provisions for their trip.

One famous Civil War event that is celebrated is the ransoming of the city, when Frederick was held for ransom by Confederate forces under General Jubal Early. The local banks raised $200,000 to pay the ransom, and of course, never were repaid.
Frederick is the home of the legendary “Barbara Fritchie” of John Greenleaf Whittier’s famous poem.

Frederick also hosted several hospitals to nurse the wounded from the many Civil War battles fought around the area, as is related in the National Museum of Civil War Medicine on East Patrick Street.

Frederick has a rich history and it is kept very well in the Frederick Historic District. The Historic District has become a destination location for the region, where people come to shop in the unique shops and stores, eat in the fabulous restaurants and enjoy the Historic Architecture.

Frederick has a growing Theater District, and an artist’s community, with many unique Art Galleries. Frederick has been awarded many distinctions: One of the Beautiful Painted Cities, Top Ten Most Livable Cities, and one of the top Mainstreet Communities, as well as many others.

For more about Frederick Real Estate, contact the Highland Group for our personal “Four Corners Tour” of Frederick County. We love living, working and playing in Frederick Md and are happy to share it with you!

Homes For Sale in The Historic District Frederick Maryland

Smaller But Better Homes Are the Trend For “Boomers”
Next Post: Are You Downsizing? – Here Are Four Tips