You are here: Home / Frederick Md Neighorhoods / Homes for Sale in Middletown Md

Beautifully scenic Middletown Maryland is conveniently located about 5 miles west of the City of Frederick. Middletown Valley is nestled between Braddock Mountain and Gathland State Park, known for it’s lovely views from the mountain parks and scenic vista’s. Middletown’s location and neighborhoods are in demand.

Middletown is “A Main Street Community”, with a friendly, active small town environment. There is an historical society, with several events throughout the year. The Middletown Government website is full of information about 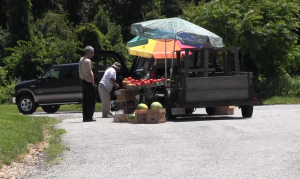 community events, like The yearly Middletown Heritage Days Festival, Family Movie Night, and the Middletown Halloween Parade. The Autumn Festival in October draws many from around Frederick County to enjoy the festivities. The highlight for many residents is the yearly week-long carnival hosted by the Middletown Volunteer Fire Department.

Nearby golf courses include the award winning Hollow Creek Golf Club,  Maryland National Golf Club, and Musket Ridge Golf Club. Farming is still an industry in Middletown Valley, with 9% of the population employed in some type of farming. It’s common to see a local farmer selling his produce.

Average temperatures in Middletown are 30 degrees F. in January, and 75% in July and August. Precipitation is higher than the U.S. average all months of the year. Humidity is average. Nestled in the Middletown Valley, wind is mild, and snowfall is normal for Maryland.

Jobs in and Near Middletown

The average commute time for Middletown residents is about 30 minutes. The proximity to commuter routes makes Middletown ideal for employment in Frederick, and south in Montgomery County and and Washington D.C. as well as nearby West Virginia and Northern Virginia. Nearby commuter routes include I-340, I-15, I-270, I-70, US 144 and US Alternate 40.

Middletown Schools have great family support and continue to educate students who score high on many state and nationwide tests. Frederick County Schools consistently rank in the top 5 of Maryland counties. Great Schools.org gives Middletown High School 9 out of 10. Students have the opportunity to take Advanced Placement courses.

Colleges and Universities Near Middletown

Use our Advanced Map Search

Find out How Much My Middletown Home is Worth

Young Lieutenant George Washington, while surveying the South Mountain area, reported that the valley to the east was one of the most beautiful places he had ever seen. Later, as a Colonel in 1755, he was to accompany General Braddock on the old Indian Trail that ran through the valley on his way to Fort Cumberland.

The early German and English settlers started to arrive in the valley in the 1730s. Among them was Michael Jesserong, who paid £66 for 50 acres (200,000 m2). He named his property Middletown and sold the first lots there in 1767, the date officially marked as that of the town’s founding.

The history of Middletown is a mirror on the nation’s development. Main Street spread to the west with construction of the National Pike through the town in 1806; the telegraph lines from Frederick to Hagerstown were routed through Middletown in 1854; and in 1896, car 11 of the Frederick Middletown Railway made its first run to Middletown. During the Civil War, both armies passed through the town to the battles of South Mountain and Antietam. In the aftermath of those battles, Middletown opened its churches and homes to care for the wounded.

Check back for more homes for sale in Middletown Md. According to the United States Census Bureau, the town has a total area of 1.7 square miles, all of it land. Catoctin Creek (Maryland) flows due south from about one mile west of town to several miles south of town.

The Burgess and Commissioners meet:

All meetings are open to the public. The Planning Commission meets the third Monday of every month at 7:00 p.m.

The Home Appraisal – The Second Sale
Next Post: The Effect of Distressed Housing on Frederick Real Estate