What Does the Housing Market Look Like After COVID?

Real estate as we have known it for 30 years has certainly been disrupted by the previous year of pandemic shut downs and “pivots”. The housing market has changed in many ways. We’re seeing a huge demand, and a very low inventory. These basic market forces are driving the market. Let’s look at other post pandemic housing trends:

This first rule of real estate is still valuable to consider, but the meaning has changed. The past year has shown us that working remotely has been a huge success for many companies. We’ve seen many of our buyer clients choosing to live further out from their places of employment because they are now permanently working remotely, or they are working remotely the majority of the time.

As we know, Frederick County has been more affordable than Montgomery County, and areas that are closer to Washington D.C. Over the decades we’ve been in real estate, we’ve seen many people make the decision to embrace the hour-long commute to enjoy the lower home prices, as well as the more relaxed lifestyle and enjoyable countryside.

When we look at post pandemic housing trends, we’re seeing an influx of homebuyers who are no longer dreading the long commute. We have personally worked with several homebuyers coming from Washington D.C., from Baltimore County, and from Howard County because they are now working remotely.

This is the case all over the country, according to studies done by the National Association of Home Builders (NAHB). We’re seeing a major shift in the demographics of where people choose to live.

Where are People Moving?

According to Bloomberg, most of the migration seen from March 2020 to February 2021 involved people moving from cities to suburbs or smaller cities and towns on the outskirts of major metropolitan areas. Most of those who moved further away tended to stay within a radius of 100 to 150 miles. This certainly falls in line with what we are seeing locally.

The metropolitan areas with the largest migration out were New York City and San Francisco, two of the most expensive cities in the country. According to the 2020 Atlas Van Lines Migrations Patterns Study, the top 10 inbound states were:

The top ten outbound states were:

What about Maryland? According to Atlas Moving, Maryland had a balance of people moving in and people moving out during the past year.

It’s interesting to note that before the pandemic, there studies already showed a general trend of people moving out of larger metropolitan areas into the suburbs. The demographic trends that were driving housing before the pandemic have only been exaggerated over the past year.

The National Home Builders Association has statistics that reveal homes are getting larger on average. Being at home for a year or more has required that our homes be used in a maximum way that most of us have never experienced: our homes have been our offices, our school, our spa, and our constant entertainment zone. The home office is quickly becoming a necessary and lasting feature in many households. Our backyards have been used more than we ever dreamed.

People have realized that we need SPACE in and out of our homes for a lot of activities…things we probably never considered before. In general, people want larger square footage and more dedicated rooms and spaces.  Fortunately, with interest rates at such historic lows, people have been able to afford a larger mortgage, and therefore more house.

According to Pew Research, more than 20% of people who moved did so directly because of the COVID virus. People want to spread out with not only more space inside the home, they also want more outdoor space. People also moved to less densely populated areas.

Additional Reading:  Tips to Buy a Home in a Hot Seller’s Market

Mortgage interest rates have been tracked and recorded since 1971, thanks to Freddie Mac. The Federal Reserve lowered interest rates in response to the Pandemic, and they have been hovering below 3% for quite a while. We keep using the term “historically low” (often in hysterical tones).

Just what does that mean?

These low rates are truly historic and are driving the demand for homes. According to the National Association of Realtors® 70% of Millennials believe that owning a home is a important directly because of their experience with the recent Pandemic.

Even though the demand is the highest it has been in my real estate career, the inventory of homes for sale is well below what we consider a normal market. It has been between 60% and 75% lower than a normal market.

Many would-be sellers are hesitant to list their homes for sale, because:

We don’t believe we are seeing a “housing bubble”… regardless of what the doomsday prophets are forecasting. The conditions we face are entirely market driven.

With lower inventory and robust demand, we’ve seen price acceleration that reminds us of the mid-2000’s. It’s important to mention that we’re hearing all kinds of doomsday forecasts of a “housing bubble” akin to the meltdown we saw in 2008. We don’t believe that we are in the same circumstances at all. That housing market was driven by artificial forces…the massive amount of loans that were given to borrowers who couldn’t afford them, and that led to massive numbers of default.

This market is not at all driven by the same forces as it was in 2008. Lending requirements are still relatively strict compared to those years between 2000 and 2006. Additionally, price acceleration is due to high demand and low inventory…the basic market forces we are seeing.

You Might Want to Wait a Little Bit on That Renovation

The cost of building supplies has skyrocketed with the disruption of supply chains since the pandemic. The increase in demand has just exacerbated that fact. Most people are aware that the cost of lumber is up. According to NAHB’s estimates as of April, rising lumber prices have added $35,872 to the price of an average new single-family home.

Builders have seen as shortages in lumber, tile, hardwoods, and lighting. Because of supply chain disruptions, builders have reported major challenges not only with sourcing appliances (air conditioners, refrigerators, washing machines, etc.) and hardware, but also with getting those products delivered.

Of course, all of these cost increases and supply disruptions also affect home renovators. This year might not be the best year to undergo a major renovation on your home.

NAHB is hopeful that the problems with supplies will work themselves out as things open up and companies ramp up production of these products.

The constricting of supplies will eventually level out. The sharp rise in home values will slow down. The costs will level off and we will see a new normal. Maybe we’ll consider that a post- post pandemic housing trend to analyze next year.

The question is, when is the right time to enter the market, either as a seller, or a buyer? Knowing the market trends and their forces is a very important first step when you are trying to make that decision.

As the 2000’s unfolded, economic growth and public policies designed to increase homeownership led to a housing boom. By 2006, the “housing bubble” began to burst. In late 2007, the economy fell into recession. The housing market continued to soften, people began to lose their jobs, and the banking industry was in crisis. After the last recession, the residential building industry suffered a large constriction. The industry lost over 1.2 million jobs…

The shortages we are now seeing are exacerbated by the fact that the industry never fully recovered from the last recession. According to NAHB, the shortage of skilled labor is one of the top problems in home building, as well as lumber, appliances, supplies and distribution. Low rates of residential construction have lent to a housing shortage over a period of multiple years. “Before the pandemic we were in a market where homebuilders had not put up enough homes,” says George Ratiu, senior economist for realtor. com

Recent reports have stated that home construction has increased, yet not enough to keep up with the demand. We have seen this to be true locally. One of our buyer couples wrote a contract on a new home in Urbana with a 9 month wait period.

The hopes are that as we make our way out of the COVID crisis, the housing industry will get to a new normal. More sellers will feel confident enough to put their homes on the market and the inventory will increase.

Here’s hoping for the best!

If you are evaluating the market, either as a buyer or a seller, give us a call. We are here to assist, whether you decide the time is now or later. We’re happy to enlighten you on the status of this present market. 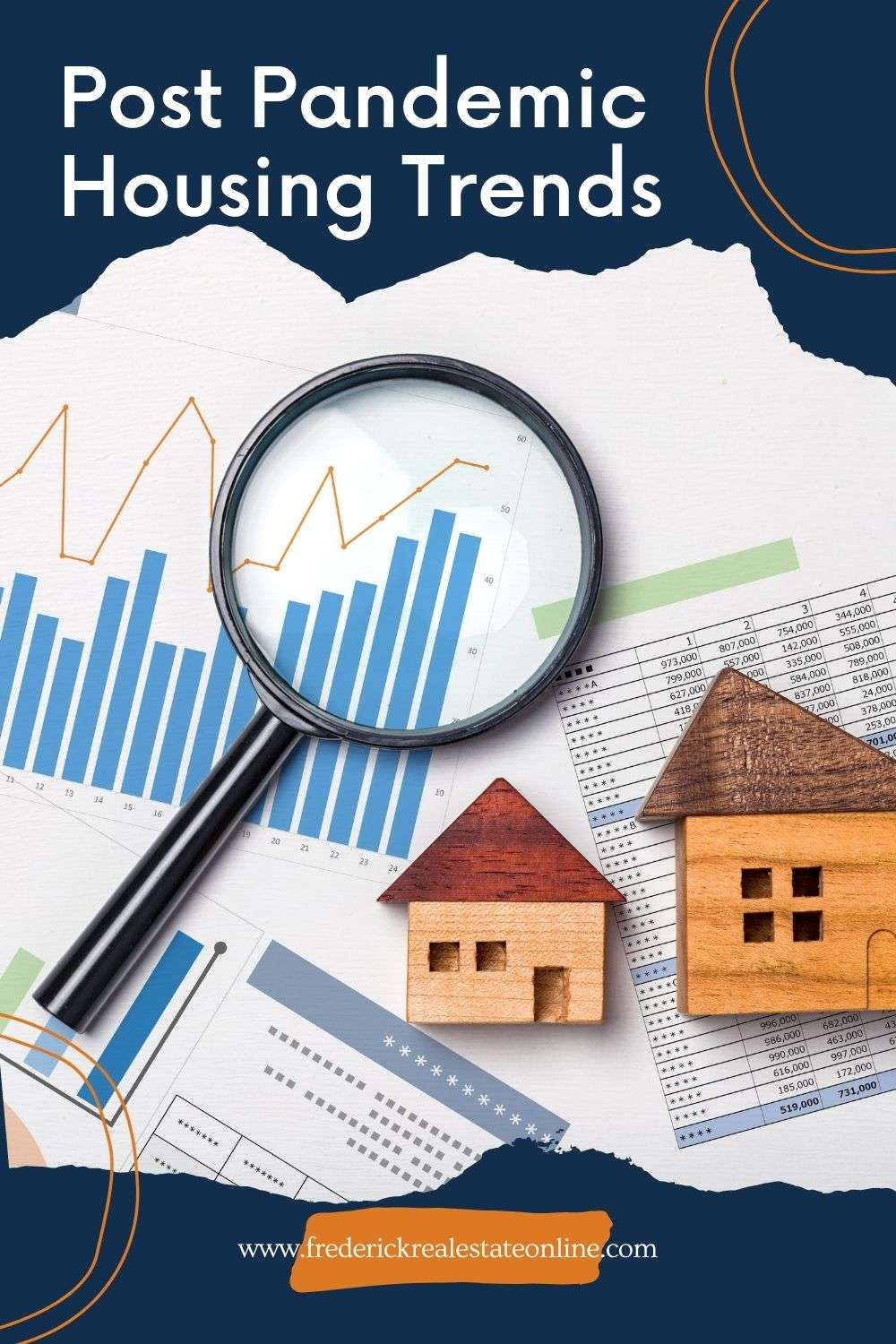