Beautifully scenic Myersville Maryland is located about 5 miles west of the City of Frederick. Part of Middletown Valley, Myersville is known for it’s lovely views of the mountains and scenic vista’s. Myersville’s rural location makes it a lovely bedroom community to Frederick and to Hagerstown.

The Myersville Town Hall website is full of information about Myersville services. 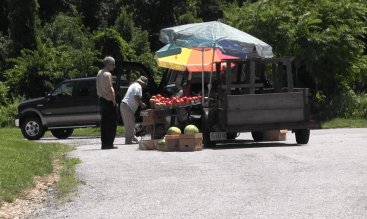 Nearby golf courses include the award winning Hollow Creek Golf Club,  Maryland National Golf Club, and Musket Ridge Golf Club. Farming is still an industry in Middletown Valley, with 9% of the population employed in some type of farming. It’s common to see a local farmer selling his produce, like this farmer on route 40 between Myersville and Middletown.

Average temperatures in Myersville are 30 degrees F. in January, and 75% in July and August. Precipitation is higher than the U.S. average all months of the year. Humidity is average. Nestled in the Middletown Valley, wind is mild, and snowfall is normal for Maryland.

Jobs in and Near Myersville

The average commute time for Myersville residents is about 30 minutes. The proximity to commuter routes makes it ideal for employment in Frederick, Hagerstown, and south in Montgomery County and Washington D.C. as well as nearby West Virginia and Northern Virginia. Nearby commuter routes include I-340, I-15, I-270, I-70, US 144 and US Alternate 40.

Middletown and Myersville residents LOVE their football! They passionately rally around the  Middletown High School football team, the Knights. Band and drama are very popular, among many other extra-curricular activities. Feeder schools include Middletown Middle School, and Middletown Primary School, as well as Myersville Elementary and Wolfsville Elementary.

Middletown Schools have great family support and continue to educate students who score high on many state and nationwide tests. Frederick County Schools consistently rank in the top 5 of Maryland counties. Great Schools.org gives Middletown High School 9 out of 10. Students have the opportunity to take Advanced Placement courses.

Colleges and Universities Near Myersville

or Use our Advanced Map Search

Chris Highland and the Highland Group is your local Myersville real estate expert. Chris has helped buyers and sellers in the Frederick County area and surrounding areas in Central Maryland for almost 24 years, to buy and sell their dream home. Contact Chris for real estate services in Myersville Md. 301-401-5119

Sell my Myersville Home: How much is my Home Worth?