Instead of a trade-in, have you ever considered donating your used car? There can be some great advantages to donating over a trade-in, and you can help individuals and families right here in Frederick.

It’s that time of year when people are planning their tax strategy before the end of the year. If you are considering a donation to up your charitable giving, Second Chances Garage, on Market Street in downtown Frederick, is a great option.

After one of my sons bought a car from Second Chances Garage, (it’s been a great used car!) I discovered a super non-profit that is right in our own backyard.

Second Chances Garage was founded in 2010 by Rick & Cindy Trawick. Remember the “Cash for Clunkers” program of 2009? It was designed to provide economic incentives to Americans to trade in their older, less fuel-efficient cars and purchase new, more fuel-efficient cars.

The Trawick’s saw the need for affordable transportation for those less fortunate in our community. The very cars which were being traded in were the kind of cars that provided reliable transportation at a price that was affordable. So they founded Second Chances Garage, a 501(C)3 non-profit organization located at 528 N. Market Street in downtown Frederick. Since 2010, the charity has provided reliable cars to individuals and families on their way to independent living.

As I spoke with the outreach coordinator for Second Chances Garage, they had just placed their 100th program car! They refurbish donated vehicles and sell them at an incredible price ($500! + $278 MD Fees and Tags) to qualified local residents who are referred by any of their 22 partner agencies. Heartly House, Faith House, Veteran Support Group, and local churches are just some examples of such organizations. Qualifying recipients are those who have been through any of these partner agency programs, have a job and are able to pay insurance. They also attend at least two sessions of financial coaching and budget planning. It’s truly a meaningful hand-up!

“The advantage to donating to Second Chances Garage,” explained Maude, the Outreach Coordinator, “is that the donor is able to claim the Very Good Blue Book value on the day they donate the vehicle as a tax deduction for cars that are used in the program. Many other non-profits who accept vehicle donations often sell the car as is at auction to get cash, and you only get to deduct the money received from the sale. This can be significantly less than Blue Book value.”

While Second Chances Garage accepts all kinds of cars, not all of them are given to those in need. The higher-end cars are sold on the used car lot and the money is used for the charity. They refurbish and detail the vehicle, so they can get the highest price, again allowing the donor to get the maximum deduction. (That’s how my son got a great Honda Accord!) 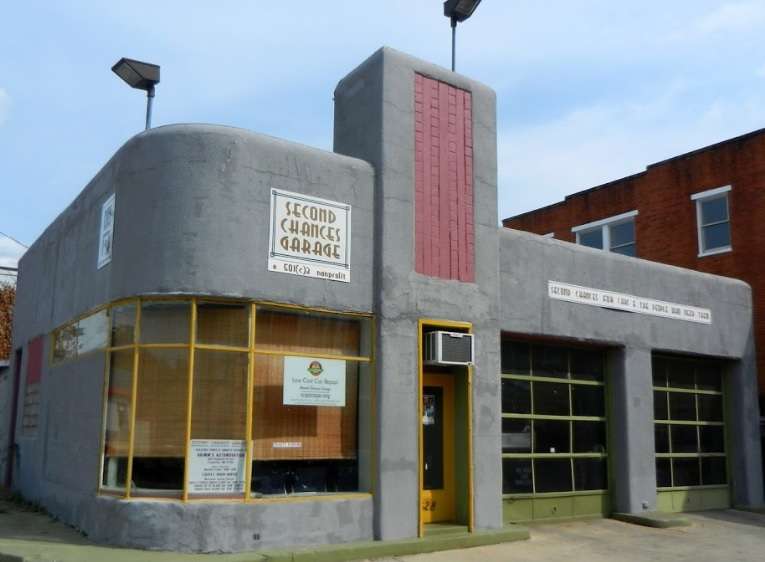 Because they depend on donations, they value having an honest reputation. If you buy a used vehicle from their lot, they will be honest and straight-forward about the condition.

When the vehicle comes to the garage, mechanics Glen Zior, the COO, and John G, or volunteers, first triage the car to determine whether it will be a program car or will be for sale on the lot, or a third option, the car may be scrapped if it isn’t salvageable for use. A program car has to pass Maryland inspection, and has to be a low-cost-0f-maintenance vehicle, so that the new owner won’t be burdened with a car that is too expensive to maintain. An added bonus, recipients of a car are able to have repairs done at the garage for a minimal price as long as they qualify.

Second Chances Garage has filled a real void in Frederick County, providing families and individuals  with safe and dependable transportation. They’ve had many calls from other areas of the state and the country. Future hopes are to open other garages in surrounding counties.

If you are thinking about a vehicle donation, give Second Chances Garage your consideration. They are located at 528 N. Market Street in Frederick. Phone: 240-724-1919, email: . You can find them on Facebook and on Instagram. Find out all the details at their website, Second Chances Garage.

If you are a non-profit helping residents get on their feet, Second Chances Garage would love to partner with you. Contact them at

The garage is in need of good new or used tools and shop equipment. Although they are car donation-dependent rather than cash donation-dependent, they don’t mind the cash! It helps cover the cost of parts and basic operating expenses.

Second Chances Garage gives second chances for cars…and the people who need them!

Are Home Values Going Up or Down In Frederick Md?
Next Post: How To Improve Your Credit Score